Working on the back of my router table.

Welcome to a new year! I can’t believe it is January 1, 2014. This month brings with it the excitement of contemplating ways to make 2014 better than 2013. For me 2014 will be a very different year. I tried some new things in 2013, some of which worked well and some of which I’ll leave behind. First, here are the major highlights from 2013.

Woodworking Projects
2013 was a big year for woodworking. I completed four projects and started a fifth – the major tool cabinet/wall surround project I am currently working on. In 2013, I completed the following projects:

Four projects completed is pretty strong for me. Most of the year was a continuation of my workshop renovation; an ambitious update for my shop all of which is laying the groundwork for an expansion into an adjacent, underutilized area of our basement.

Sawtooth Ideas and Woodworking Plans
The garden planter was the subject of my first ever guest blog post. I did it for Sawtooth Ideas and wrote it in conjunction with a review of their IdeaRoom software. If you are a blogger, guest posting on other blogs is a big deal. 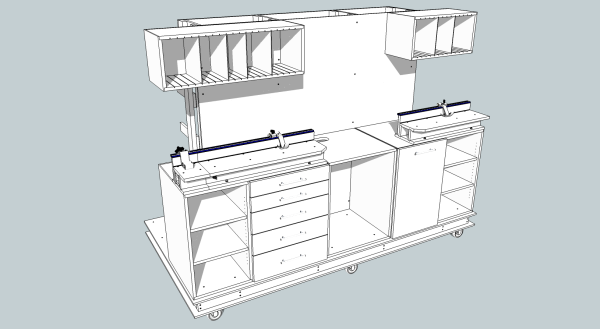 Speaking of Sawtooth Ideas, 2013 was a year in which I worked more closely with them not only on the guest blog post, but also creating SketchUp models for them on a freelance basis. While I no longer do this, it was a very good experience and it was something that challenged and enhanced my SketchUp abilities. I created six models which ranged from moderately hard to the one you see above which was the most complex SketchUp model I have ever created.

I had a goal of creating at least 10 woodworking plans in 2013. As I embarked on this initiative, I quickly became burned-out because like everything I do, I put a ton of effort into the process. I only published two plans in 2013 (see them here and here). One woodworker recently commented that some of my plans are magazine quality, but I want them to be even better which takes time.

Modern Woodworkers Association
I attended only one MWA event in 2013 – their meetup in conjunction with the Highland Woodworking Lie-Nielsen Hand Tool Event, but if there was just one to attend, this was a good one.

Chris had his Dutch Tool Chest there.

In addition to being with a ton of woodworkers, the MWA group met for lunch and I had the pleasure of talking at length with Scott Meek, a great guy of which I will be a future customer of, one day. I think I would have done more with the MWA if it were not for all the time I put into the SketchUp models for Sawtooth Ideas. In addition, it is a six-hour round trip to Atlanta which makes attending even the special events there difficult.

What will 2014 be like?
I have soooo much to do! I had a goal of building a chair sometime in 2013; adding chairs to my resume seems like a pretty cool thing to do. I envisioned a brief hiatus from my shop upgrades to build an Arts and Crafts style chair – this never happened. But, building chairs in 2014 will happen and happen in a big way.

I want to build a piece of furniture. Prior to embarking on my workshop enhancements, the projects I completed were home improvement related (see them here and here). I have not tackled a serious furniture project in a long time. My daughter needs an additional bookcase, so I will insert one into my 2014 schedule.

I want to also create one or two woodworking plans and along with that, learn either Adobe Photoshop or Adobe Illustrator to augment the illustrations I do with SketchUp. My thinking now is to drop the idea of buying SketchUp Pro in favor of using the Adobe products we already own. In addition, I’d like to participate more in the MWA as well as become a member of the Alabama Woodworkers Guild.

These things will make 2014 jammed up with woodworking activities. Along with building stuff, I want to network more with other woodworkers and learn some new software programs. There is no way I will get all this accomplished, so I’ll have to prioritize this list and work as hard as I can. But, thinking of all this makes this first day of 2014 an exciting one.

My name is Jeff Branch and I operate a home based woodshop in Pelham, Alabama USA. This is my woodworking journal. I talk about the things I make. With each project, I write about the construction process. Some of these projects feature a follow-up document; a woodworking plan, which you can download. I hope you will look around and be sure to visit again soon.

I Embark on a Massive Project – Renovating my Kitchen...

"Sometimes when I'm feeling really crazy, I'll only measure once."

All content at jeffbranch.wordpress.com is copyright (c) 2009-2021 by Jeff Branch, except where noted. Photos and text may not be reproduced without written permission. Get the details by clicking here.
Loading Comments...
%d bloggers like this: